M31 vs. the German Model

The Art Workers Council Frankfurt/M. (AWC) spoke with the anarcho-syndicalist trade union Freie Arbeiterinnen und Arbeiter-Union (FAU, Free Workers Union) Frankfurt/M. about the crisis, the so-called 'German Model', working conditions and organizing in the cultural sector, and about the mobilization for the European day of action M31 on March 31, 2012. 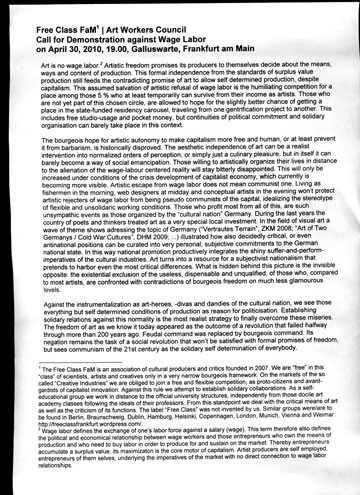 AWC In spring 2010 we participated in a demonstration organized by the Crisis Alliance Frankfurt/M. While the government prepared rescue packages for stumbling banks, the demonstration promoted the abolishment of wage labor. Back then the FAU had also formulated a call for this event. Currently, a transnational alliance is mobilizing for the European Day of Action M31. How did the crisis develop since 2010 from your point of view?

FAU After the housing crisis in the United States, followed by a global financial crisis, there is now a Euro crisis. It began in those countries with the Euro currency that Germany subjugated through economic competition. Greece, Ireland, Portugal, Spain and Italy. The new austerity programs, dictated by Germany to stabilize the Euro zone, have catastrophic consequences for living conditions in all of Europe. In Greece, the consequences of Germany's authoritarian crisis policy are most drastically perceptible. The health care system has collapsed, social systems and minimum wages have been cut and the whole public infrastructure is threatened by privatization. The lives of millions of people in Europe are affected by this policy today. Also in Germany the people are starting to experience its consequences more and more. Although Germany presents itself as winner of the crisis, the secret behind the successful "German Model" is nothing more than an advancing decline of living conditions inside the country.

AWC While resistance builds up in other european countries, social peace in Germany seems to be not on the wane at all. Which role do Germany's trade unions play?

FAU The official trade unions conform to the government to a wide extent, not only in Germany. In Spain, labor conditions worsened drastically just recently. Labor time was increased, retirement age was extended, pensions have been cut, and the already low level of protection of workers against mass dismissals have completely been cancelled. The big communist and social-democrat trade unions, CC.OO and UGT, support the governmental decisions. In opposition to this grass-roots unions like the CNT mobilize for the March 29. general strike.

In Germany, but also in the rest of Europe, the peaceful business climate organized between the Confederation of German Trade Unions (DGB) and employers has a massive impact on many things, and backs up Germany's aggressive policy concerning it's national interests. Just last year, on the official trade union days, ver.di and IG Metall decided for the protection of the national economy. This is nothing more than a sad effort to secure the interests of core employees. The only ones profiting from official trade unions are those workers who still have more or less safe and well-paid jobs. Outside this oasis of collective labor agreements, labor conditions have been largely deregulated by temporary employment agencies, minor employments (400-euro jobs) or short-term contracts for freelancers.

Germany's unique political backwardness of the working environment is rooted in its post-fascist history. Under Germany's present labor law, interpretations of the national-socialist labor law, as formulated by Hans Carl Nipperdey, member of the "NS-Reichswahrerbund", later president of Germany's federal labor court, are still traceable today. According to his guidelines, political strikes are still forbidden in Germany. And common strikes are only accepted as a form of "last resort" in disputes over collective labor agreements and only if they are organized by trade unions which have the "capacity for collective bargaining."

However, there are many things which are forbidden in other European countries too. We hope that the upcoming transnational protests against capitalism and the crisis measurements help to break the fear of such prohibitions. M31 could be a step towards this direction.

AWC It seems like only the activists of the Occupy movement are being heard around here so far. They primarily criticize financial capital, whose representatives most of them identiy as the guilty minority.
But when the solid foundation of German leadership and its dictatorship of austerity measures in Europe is the policy of the German trade unions, why should banks be held to account rather than those nationalist trade unions? The M31 alliance announced a "visit" to the European Central Bank (ECB). Wouldn't it make more sense to occupy the DGB instead turning another bank into a symbol of evil, just as the Occupy movement does?

FAU The German trade unions are an important part of the system of nationalist policies. There are surely reasons to pester them, in particular because of their behavior towards temporary employment agencies. But, with regards to the European crisis policy, the ECB is a political institution responsible for implementing government decisions. This makes them very different from corporations such as the Deutsche Bank AG. The M31 alliance is notably not interested in criticizing financial markets. The reformation of the banking sector won't change our living conditions to a wider extent anyway. The pressures that people in Greece or here are faced with won't improve by a financial transaction tax. Questioning profits and equity prices won't give answers to questions about basics such as poverty, exploitation or healthcare, which no longer exist for people in Greece. We want to principally question all institutions of capitalism and forced wage labor.

AWC Our group has experienced itself how individualized labor conditions, with it's contradictory promises of fortune, hamper a binding political character and organized solidarity. Most workers in the so-called "creative industries", from art exhibitions to web design, work under more than dubious conditions. Producers seem to accept the misery because of glamorous promises of success and self-fulfilment. Which experiences do you have with working conditions inside the cultural industries? Classical industrial actions seem not to be an option for entrepreneurs, because they aren't employees or wage-workers in the strict sense of the word. Which strategies or organisational approaches do you have in this sector?

FAU Most of our members working in the cultural sector have several different side jobs. Maybe such working conditions are more accepted and established more often in the cultural field than in other sectors. The comprehensive but absurd wish for self-fulfillment in wage-labor work might be one explanation for this. But flexibilization as an organizational problem has become a general rule everywhere. Once safe work places are fragmented into two or three 400€-jobs, on demand and illegally without sick and holiday pay. Resistance against these working conditions mostly come up when there are problems inside a company or when it closes and people get fired, so when it's almost too late. Organizing in this short period of time might be financially lucrative for the people but, regrettably, the whole organization scatters extremely fast. Freelancers organized in our trade union try to help one another to find appointments and jobs. Together they take care of minimum payments, especially if they are the ones who appoint work to others by themselves. In our eyes, this is a classical part of political trade union work. In Sweden, the SAC organizes something very similar with "paperless" immigrants. It's called "register". Another – historical – example in the 1920's and 30's comes from filmmakers and technicians of the anarcho-syndicalist CNT in Spain. Even after the war against Franco was lost they continued this kind of labor assignment covertly. People who wanted to produce films had to contact this institution and than the jobs were internally allocated. This is and should be part of trade union work.

AWC In Germany, ver.di is the DGB trade union, which is, amongst others, responsible for workers of the art and cultural sector. What are your experiences with ver.di?

FAU Within the different DGB trade unions, ver.di has been the driving force behind miserable low wages when the collective labor agreement between the DGB and employers have been negotiated and signed. This is why the legitimate claim for equal pay and equal treatment are still not valid today. So, our sympathies are very limited.

Concerning the cultural sector, we also have made very negative experiences with them. There had been massive conflicts with a local ver.di boss in Berlin. Employees of the repertory cinema Babylon-Mitte organized themselves to improve their working conditions. The cinema was supported by the left-wing parliamentary party "Die Linke", which sat in the local council at that time and financed the cinema with several hundred thousand Euros per year. A ver.di secretary ousted the employees by signing a contract with the cinema's boss without asking persons concerned and without personal basis inside the cinema. The contract even lacked standards common in other cinemas of the city. Ver.di stabbed the workers in their backs, which is not an exception. For the employees, the conflict was over and, thanks to ver.di, "social peace" was secured again.

AWC What is going to happen after March 31?

FAU For many people participating, this is just the beginning of an intense cooperation beyond national borders. The FAU is member of the IWA, the anarcho-syndicalist trade union international, where we have been practicing such cooperation for many years. What's new about M31 is that participating groups, who share similar ideas or aims, but never knew from each other, now want to practice teamwork and mutual support now. This could enforce the assertiveness of all participants in upcoming conflicts enormously. Anyway, as soon as April, there is going to be another meeting to evaluate the actions that took place, and where we will plan other upcoming actions.