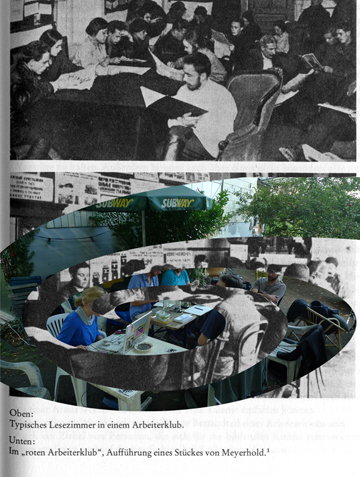 Art is no wage labor2. Artistic freedom promises its producers to themselves decide about the means, ways and content of production. This formal independence from the standards of surplus value production still feeds the contradicting promise of art to allow self determined production, despite capitalism. This assumed salvation of artistic refusal of wage labor is the humiliating competition for a place among those 5% who at least temporarily can survive from their income as artists. Those who are not yet part of this chosen circle, are allowed to hope for the slightly better chance of getting a place in the state-funded residency carousel, traveling from one gentrification project to another. This includes free studio-usage and pocket money, but continuities of political commitment and solidary organisation can barely take place in this context.

he bourgeois hope for artistic autonomy to make capitalism more free and human, or at least prevent it from barbarism, is historically disproved. The aesthetic independence of art can be a realist intervention into normalized orders of perception, or simply just a culinary pleasure, but in itself it can barely become a way of social emancipation. Those willing to artistically organize their lives in distance to the alienation of the wage-labour centered reality will stay bitterly disappointed. This will only be increased under conditions of the crisis development of capitalist economy, which currently is becoming more visible. Artistic escape from wage labor does not mean communist one. Living as fishermen in the morning, web designers at midday and conceptual artists in the evening won’t protect artistic rejecters of wage labor from being pseudo communists of the capital, idealizing the stereotype of flexible and unsolidaric working conditions. Those who profit most from all of this, are such unsympathic events as those organized by the “cultural nation” Germany. During the last years the country of poets and thinkers treated art as a very special local investment. In the field of visual art a wave of theme shows adressing the topic of Germany (“Vertrautes Terrain”, ZKM 2008; “Art of Two Germanys / Cold War Cultures”, DHM 2009; ...) illustrated how also decidedly critical, or even antinational positions can be curated into very personal, subjective commitments to the German national state. In this way national promotion productively integrates the shiny suffer-and-perform-imperatives of the cultural industries. Art turns into a resource for a subjectivist nationalism that pretends to harbor even the most critical differences. What is hidden behind this picture is the invisible opposite: the existential exclusion of the useless, dispensable and unqualified, of those who, compared to most artists, are confronted with contradictions of bourgeois freedom on much less glamourous levels.

Against the instrumentalization as art-heroes, -divas and dandies of the cultural nation, we see those everything but self determined conditions of production as reason for politicisation. Establishing solidary relations against this normality is the most realist strategy to finally overcome these miseries. The freedom of art as we know it today appeared as the outcome of a revolution that failed halfway through more than 200 years ago. Feudal command was replaced by bourgeois command. Its negation remains the task of a social revolution that won’t be satisfied with formal promises of freedom, but sees communism of the 21st century as the solidary self determination of everybody.

[1] The Free Class FaM is an association of cultural producers and critics founded in 2007. We are “free” in this “class” of scientists, artists and creatives only in a very narrow bourgeois framework. On the markets of the so called “Creative Industries” we are obliged to join a free and flexible competition, as proto-citizens and avant-gardists of capitalist innovation. Against this rule we attempt to establish solidary collaborations. As a self-educational group we work in distance to the official university structures, independently from those docile art academy classes following the ideals of their professors. From this standpoint we deal with the critical means of art as well as the criticism of its functions. The label “Free Class” was not invented by us. Similar groups were/are to be found in Berlin, Braunschweig, Dublin, Hamburg, Helsinki, Copenhagen, London, Munich, Vienna and Weimar.

[2] Wage labor defines the exchange of one’s labor force against a salary (wage). This term therefore also defines the political and economical relationship between wage workers and those entrepreneurs who own the means of production and who need to buy labor in order to produce for and sustain on the market. Thereby entrepreneurs accumulate a surplus value, its maximizaton is the core motor of capitalism. Artist producers are self employed, entrepreneurs of them selves, underlying the imperatives of the market with no direct connection to wage labor relationships.